INTERVIEW WITH FEDERICA SABBATI: “MAKE A CHANGE IN EVERY SINGLE-FAMILY HOME” 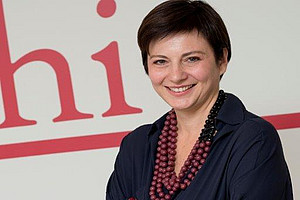 Federica Sabbati: It is revolutionary, I think, from a global perspective. Europe has been on a path towards very clear goals in terms of CO2 reduction for some time. We know already where we are heading. But the fact that in Paris a global agreement was reached has since then brought more visibility to the issue of climate protection and climate change worldwide. It has sensitised more people. It was a very important signal to governments, politicians and industrial sectors.

It means there’ll be no more business as usual anymore.  It’s a clear message. Energy efficiency is imperative and decarbonisation is the goal. Energy supply has to comply: electricity production needs to turn green and gas needs to be renewable. The HVAC industry has to contribute, too. The technologies that are put on the market need to comply. The challenge, however, is that we are talking about the building sector.  And therefore, we are talking about having to reach and make a change in every single-family home.

The point of departure is that for decarbonisation you will have to include the building sector into the plan. Not just the transport sector, industry and electricity generation. The strategy focuses on buildings because of the total amount of their energy consumption and, accordingly, the potential for energy savings. A second reason was that at a national level in Europe, hardly any country had a strategy of its own.

The main pillars are the Energy Performance of Buildings Directive (EPBD), the Energy Efficiency Directive and the Renewable Energy Directive. The EU sets targets, intermediate and long-term, including sectorial targets. Increase of energy efficiency is the biggest lever in the building sector, as it will decrease CO2 emissions and in parallel increase the share of renewable energy use in heating. Member states are pushed to create national alliances that focus on the renovation of the building stock across Europe. A large part of the buildings in Europe were built before the 1950s or 1960s, when there were few energy regulations for buildings, if any.

The review of these directives is to be adopted in 2018. There is a mix of mandatory targets and recommendations, because the economic situation of every country is different, of course. The resources and infrastructure are very different. If you look at Germany, it is very much a gas-based infrastructure. If you look at France, it is very much electricity-based due to their nuclear production. So, no one solution fits all.

We see the modernisation of the heating stock as a main priority that we have to deal with as an industry. We need to make sure that people are aware of energy efficiency. We recently suggested the introduction of an energy label, not just for new products but also for older, installed appliances. This would raise consumer awareness. We already have this energy label for older appliances in Germany, Austria and in the UK. Many other countries in Europe are considering adopting it.

The focus needs to be on consumer awareness, the role of installers, and financing of the investment costs – because a heat pump simply costs much more than a boiler. Like I said, people need to know how efficient or inefficient their current heating system is. Therefore, installers have an especially important role because they advise consumers and can push for modernisation of the old stock through the promotion of efficient and renewable-based technologies such as heat pumps. Partnerships – private and public, companies and policymakers – can be a winning solution to that end.

Different countries have invested in different technologies and in different infrastructures for energy generation. In the north of Europe, of course, renewable electricity is more common. Investments in green energies have been made for 20 or 30 years. In other parts, such as Italy for example, there have been big investments made in the production and infrastructure of gas. And then you have countries such as Poland relying very much on coal. The disparity and the sources of energy are very much linked to the natural resources of a country.

It’s very clear to everybody who works in the field of energy in Europe, that despite differences we have a serious problem with climate change and therefore we have to change the way we produce and use energy. The suppliers of gas and electricity have in many cases increased their attention on alter- native ways of producing their energy. They are taking new approaches: gas becomes biogas, for example from agricultural manure, or green hydrogen. Oil becomes bio oil. And electricity becomes green. But no energy transition happens overnight. It is a very long road.

To be honest, if you had asked me a few months ago, maybe a couple of years ago, I would have said something different. But there are some developments which I find quite relevant. There is increased attention on renewable gas, whether it is hydrogen or power to gas. I see more heat pumps than today, more hybrids, more smart heating systems. I don’t see – to be honest – that it’s all going to be based on electricity, for example, or all on gas. The heating market in 2050 is going to be very different from what it was in 1950. That’s for sure.

Share this post
[jetpack_subscription_form show_subscribers_total="false" button_on_newline="false" custom_font_size="16px" custom_border_radius="0" custom_border_weight="1" custom_padding="15" custom_spacing="10" submit_button_classes="" email_field_classes="" show_only_email_and_button="true" success_message="Success! An email was just sent to confirm your subscription. Please find the email now and click 'Confirm Follow' to start subscribing."]
We use cookies on our website to give you the most relevant experience by remembering your preferences and repeat visits. By clicking “Accept All”, you consent to the use of ALL the cookies. However, you may visit "Cookie Settings" to provide a controlled consent.
Cookie SettingsAccept All
Manage consent

This website uses cookies to improve your experience while you navigate through the website. Out of these, the cookies that are categorized as necessary are stored on your browser as they are essential for the working of basic functionalities of the website. We also use third-party cookies that help us analyze and understand how you use this website. These cookies will be stored in your browser only with your consent. You also have the option to opt-out of these cookies. But opting out of some of these cookies may affect your browsing experience.
Necessary Always Enabled
Necessary cookies are absolutely essential for the website to function properly. These cookies ensure basic functionalities and security features of the website, anonymously.
Functional
Functional cookies help to perform certain functionalities like sharing the content of the website on social media platforms, collect feedbacks, and other third-party features.
Performance
Performance cookies are used to understand and analyze the key performance indexes of the website which helps in delivering a better user experience for the visitors.
Analytics
Analytical cookies are used to understand how visitors interact with the website. These cookies help provide information on metrics the number of visitors, bounce rate, traffic source, etc.
Advertisement
Advertisement cookies are used to provide visitors with relevant ads and marketing campaigns. These cookies track visitors across websites and collect information to provide customized ads.
Others
Other uncategorized cookies are those that are being analyzed and have not been classified into a category as yet.
SAVE & ACCEPT